In infants(up to 3 years old) the pressure that hydrocephalus causes inside the skull will result in rapid growth and the head will become too large. The area at the top of the child's head, which at this age is relatively soft, can become tense and the veins may become become clearly visible.During a child's medical checkup, the growth rate of the head should be compared to the expected growth rates. If a child's head is growing faster than expected, further studies should be carried out.

The infant may be irritable, lethargic or unusually fussy; his appetite may be poor and repeated vomiting may occur. The eyes may deviate downwards (a condition referred to as sun setting eyes) or there may be limited ability to look upward. Alternatively, the eyes may cross. The infant or young child may display delayed development. There may also be subtle changes such as reduced movement of the legs or persistent of kicking movements.

In older childred and adults, for whom the skull has already fused, the head will usually not grow at an abnormal rate. Increases in intracranial pressure can lead to headaches, sleepiness, irritability, visual problems, nausea/vomiting, neck pain, and in rare cases seizures. Other changes may occur to ones behaviour, personality, memory, or ability to concentrate. Any of these ones may affect school performance. Lethargy, drowsiness, balance problems, and double vision are common symptoms. Infants may have difficulty looking upwards or they may have crossed eyes.

In adolescents and adults, hydrocephalus will produce a dementia. There can be loss of acquired intellectual functions; this will result in difficulties at school or at work, loss of judgement, memory problems, or changes in personality and behaviour.

The Babinski, or plantar, reflex can by used to indicate brain or spinal chord disease in children over one year of age. This test is done by drawing a blunt object along the outer edge of the foot from the heel to the little toe. A normal, or flexor, response would result in the toes bunching together and moving downwards. The Babinski reflex, or the extensor response, where the big toe moves upwards can indicate a problem. Until a child is one year of age, the Babinski reflex is always present.

Another test is the finger-to-nose reaction. For this, the neurosurgeon will hold up a finger and then ask the patient to touch it, and then to touch his own nose as quickly as possible. This can expose neurological or visual problems.

Pronator drift can also be tested for. This is done by having the patient stand, close his eyes, and then extend both arms forwards with the palms up. If one arm waves, or drifts down and to the side, this could indicate damage to the motor area of the brain.

How is hydrocephalus diagnosed?

Depending on the child's age at the time of discovery, various radiographic techniques are available to confirm the hydrocephalus diagnosis.

In the first six to twelve months of life, the diagnosis can often be made with an ultrasound (sonogram) of the brain, which may show the enlarged ventricles. After the skull fuses, the diagnosis is best made with MRI or CT . Each one of these tests has their pluses and minuses, but overall most neurosurgeons would favour an MRI scan. While this test takes longer than a CT scan, and thus usually requires sedation, it gives a much better picture of the brain and the possible cause of the hydrocephalus. This information may effect the treatment options of the child. 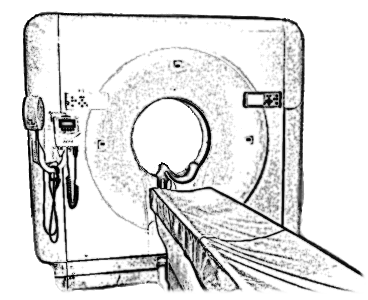 The CAT or CT scanner takes a series of x-ray images that can be used to view "slices" of the body (or any other object), or to create a 3D image.

This type of image can be used to view the ventricles, to diagnose many of the causes leading to hydrocephalus, to check the shunt catheter placement, and so on.

Often the CT scanning will involve the use of contrast dye to create better images of the scanned area. 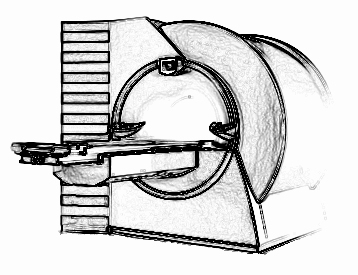 The MRI scanner constantly rotates to change the direction of the magnetic field, this leads to information which can be used to create 2-dimensional or 3-dimensional images of the scanned area.