abdomen
The cavity between the diaphragm and the pelvis
achondroplasia dwarfism
The most common cause of dwarfism, caused by abnormal development of the cartilage and bones. Achondroplasia leads to shortened and thickened bones, especially in the limbs. The trunk of the body, and the head, will usually be of normal size. There are often changes to the development of the face such as a prominent forehead and changes to the the shape of upper jaw. Development of the foramen magnum and the spinal canal may lead to hydrocephalus.
abdominal
To with the abdominal viscera
Alzheimer's disease
A disease of the nervous system. Mostly the effects are of cognitive impairments, agitation and emotional outbursts often occur. Memory is often affected; this leads to confusion due to the difficulty of remembering everyday tasks. In later stages there is widespread atrophy of the brain.
aneurysm
A local dilation of an artery
anterior
At, or towards, the front
antibiotics
A drug which destroys bacteria
antisiphon device
A device which prevents siphoning see the Antisiphon page
aplasia
Defective development of tissue or organ
apraxia
The inability to recognise common items or perform correct movements
aqueduct of Sylvius
A passage which connects the third and fourth ventricles
aqueductal stenosis
Aqueductal stenosis is the enlargement of the lateral and 3rd ventricles with a normal 4th ventricle
arachnoid
A web-like membrane covering the brain. Located between the dura and pia matter.
arachnoid villi
The protrusions in the arachnoid where the CSF is reabsorbed into the blood stream
Arnold-Chiari malformation
A rare congenital anomaly in which two parts of the brain, the brainstem and the cerebellum, are longer than normal and protrude down into the spinal canal. In most cases, symptoms begin during infancy; however onset of symptoms may be delayed until adolescence or adulthood. Symptoms usually include vomiting, muscle weakness in the head and face, difficulty swallowing, and varying degrees of mental impairment. Paralysis of the arms and legs may also occur.
Adults and adolescents with Chiari malformation who previously were asymptomatic may show signs of progressive brain impairment as they grow older, such as involuntary, rapid, downward eye movements. Other symptoms include dizziness, headache, double vision, deafness, an impaired ability to coordinate movement, and episodes of acute pain in and around the eyes.
arthroscopy
The examination of a joint using an endoscope
aspiration
The removal of fluids from a body cavity by means of suction
atretic
Lacking in natural openings
atrium
One of the upper chambers of the heart(pleural= atria)
atrophy
The wasting away of part of the body due to degeneration of the cells.
Bovie cautery
An electrical current is used to heat a treatment filament or a tip. The tip becomes extremely hot and is then used to transfer heat to the tissue, producing a thermal clinical effect
Burr hole
A hole drilled into the skull, this process is called trepanation
butterfly needle 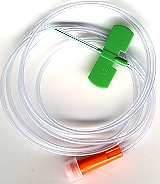 calcification
The depositing of calcium oxide
cannula
A type of needle used for the delivery, or the draining, of fluids from the body
catheter
A tube used for the drainage of a liquid
carbonic anhydrase
An enzyme. It affects the absorption of carbon dioxide in haemoglobin. It also catalyses the formation of carbinic acid in the stomach
cauda
The bundle of sacral and lumbar nerves with which the spinal chord terminates
caudal
To do with the cauda
cautery
A device which used a red hot wire to cauterize a tissue
cauterize
To cut using heat
cerebrospinal fluid
See the CSF document
choroid plexus
Structures lining the floor of the lateral ventricle and the roof of the third and fourth ventricles. The choroid plexus is the junction between the blood stream and the ventricles. The choroid plexus allows nutrient to pass into the CSF, and allows waste back into the blood stream.
circulatory system
The system which caries blood around the body.
cisterns
Local enlargements of the subarachnoid space
claustrophobia
A fear of confined spaces
coagulate
To clot.(coagulation= the thickening of a bodily fluid)
commissure
Fibres connecting different parts of the brain
coronal
To do with the top(corronal sutere= the area on the top of an infants head where dhe bones have not fused)
craniocephalic
Large head created by a hydrocephalic brain
craniosynostosis
Result of apposition and overlapping of the cranial sutures in an infant, following decompression of hydrocephalus
craniotomy
Surgery which includes opening of the skull
cysts
A tumour with a membranous capsule which contains fluid
Dandy-Walker malformation
The Dandy-Walker syndrome is a malformation of the brain that involves the maldevelopment of the cerebellum (hindbrain), associated with a cystic enlargement of this area, and frequently hydrocephalus.
dementia
A condition where the cognitive functions and the memory are failing
dilated
Opened (eg. the iris of the eye is dilated to let in more light)
diptheroids
False membranes which grow on mucus membranes
distal
Placed further away.
dna
The matter which contains all the information needed by a cell.
dura mater
A tough and fibrous mater which is partially attached to the cranial cavity The cranial dura matter has 2 layers, the periosteal (outer layer) and the meningeal (inner layer)
ectopia
Abnormal placement
electrocardiogram
The resulting output from an electocardiograph
electrocardiograph
An apparatus which measures the electrical activity of the heart
endoscope
A device which passes light into a body cavity and allows the body cavity to be viewed
endoscopy
The usage of an endoscope to examining internal body cavities
encysted
Enclosed in a cyst
ependyma
The membrane lining of the cerebral ventricles and the spinal chord
epilepsy
Disturbances in the medial temporal lobe structures. The effects are convulsive seizures of varying severity
etiology
The cause of diseases, and the study thereof
fenestrate
To cut an opening in a membrane, often to allow fluid to escape.
fiberoptic
Using glass strands to pass light.
fontanel
A soft membranous space between the cranial bones of an infant
foramen magnum
A large opening at the base of the skull, through which the lower part of the brain stem connects to the spinal chord.
foramena of Luschka
Two lateral openings that serve to connect the fourth ventricle to the subarachnoid space
foramen of Magendie
A medial opening that serves to connect the fourth ventricle to the subarachnoid space
foramina of Monroe
A medial opening that serves to connect lateral ventricles to the third ventricle
fossa
A small depression or pit
fulminating
Occurring suddenly, and quick to take course
glioma
A malignant growth of nerve connective tissue
Hematoma
(haematoma) A haemorrhage in the brain
haemorrhage
A bleeding into a body cavity
haemostat
A clamp used for stopping blood flow
hydrocephalus
For a concise explanation see: here
hypernatremia
A condition of increased sodium in the body, usually caused by water loss.
hypophyseal fossa
(See sella turcica)
hypotension
Low pressure
Idiopathic intercranial hypertension (IIH)
also called "pseudotumor cerebri" is a condition where there is an imbalance in the pressure regulation of the CSF pressure, and and an empty sella.

In IIH, unlike in hydrocephalus, these effects occur with-out enlargement of the ventricles.

The CSF will have roughly twice the normal pressure.
The cause of IIH is unknown, the condition occures most often in women in their 30's.

vermis
The part of the brain which connects the the two hemispheres
villi
Finger-like projections from a surphase.
viscera
The internal organs of the body
© 2021 https://hydrocephalus.allanach.dk   Hydrocephalus Glossary